skip to main | skip to sidebar

Pictures from the movie 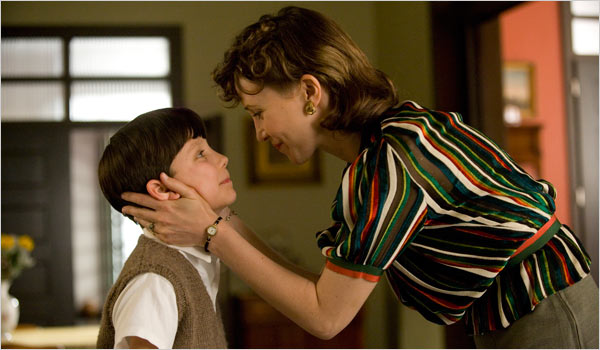 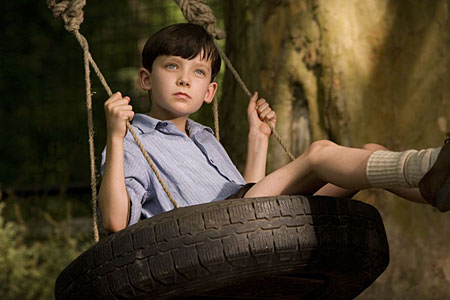 The Boy in the Striped Pyjamas (The Boy in the Striped Pajamas in the United States) is a 2008 British drama film directed by Mark Herman and produced by David Heyman, starring Asa Butterfield, Jack Scanlon, David Thewlis, and Vera Farmiga. It is based on the book of the same name by Irish novelist John Boyne.[1]
The film tells the story of Bruno, an eight-year-old German boy who leads a rather comfortable life in Berlin during the World War II. His father is a high ranking Nazi SS officer, but things change when the family has to move due to his father's new post. In his innocence, Bruno sees the nearby concentration camp as a "farm" and wonders why its inhabitants are always wearing striped pyjamas. Eventually Bruno becomes friends with a Jewish boy his own age who lives on the other side of the fence.
Posted by monica93 at 5:05 PM No comments:

A description of the main characters

Bruno is the smart young boy who narrates the story. Father is a caring man to his family, but is in charge of a camp in Germany, so not very caring there. Mother is kinda controlled by father, yet strict and loving. Gretel is your average girl who fights with her brother and is obnoxious sometimes. Maria is the servant who does anything father and mother say and doesnt really say much. The cook is a cook. Kotler is a mean dude...seriously like thinks hes soo cool..Shmuel is the sweet boy in the Holocaust who is just terrified of the Nazis, naturally, and really enjoys Bruno's company. The Fury is the group of people that Father is the head of. perhaps Nazis.
Posted by monica93 at 5:04 PM No comments:

The main characters in the boy in the striped pajamas

Plot summary about the book

Bruno is a nine-year old boy who is growing up in Berlin during World War 2. He lives in a 5-story house with his parents, his 12 year old sister Gretel and a few servants. His father has a very important job and they have just been visited by a man called the 'Fury' (aka Hitler). After he visits, his father gets a new uniform and his title is changed to 'Commandant', and to Bruno's displeasure the family have to move away to a place called Out-With (Auschwitz).
When Bruno gets there he is immediately homesick after leaving behind his home, grandparents and his three best friends. He is unhappy with his new home. It only has three floors and there are always soldiers coming in and out of the house. Bruno is lonely and has no one to talk to or play with. However, one day while Bruno is looking out of his window he notices a bunch of people all wearing the same striped pyjamas. As he is a curious child, Bruno asks his father who these people are, but gets a rather unusual answer. His father tells him that these people are not people at all.
Bruno is not allowed to explore the house or its surroundings. Due to sheer curiosity and boredom, he is forced to explore. He spots a dot in the distance on the other side of the fence and as he gets closer, he sees it's a boy. Excited by the prospect of a friend, Bruno introduces himself. The Jewish boy's name is Shmuel. Almost every day, they meet at the same spot and talk. Eventually, for a variety of reasons, Bruno decides to climb under the fence and explore Shmuel's world.
The story ends with Bruno about to go back to Berlin with his mother and sister on the orders of his father. As a final adventure, he agrees to dress in a set of striped pyjamas and goes in under the fence to help Shmuel find his father, who went missing in the camp. The boys are unable to find him, and just as it starts to rain and get dark, Bruno decides he would like to go home, but they are rounded up in a crowd of people by the nazi guards who start them on a march. Neither boy knows where this march will lead. However, they are soon crowded into a gas chamber, which Bruno assumes is a place to keep them dry from the rain until it stops. The author leaves the story with Bruno pondering, yet unafraid, in the dark holding hands with Shmuel. "...Despite the chaos that followed, Bruno found that he was still holding Shmuel's hand in his own and nothing in the world would have persuaded him to let go".
In an epilogue, Bruno's family spend several months at their home trying to find Bruno, before his mother and Gretel return to Berlin, only to discover he is not there as they had expected. A year afterwards, his father returns to the spot that the soldiers found Bruno's clothes (the same spot Bruno spent the last year of his life) and, after a brief inspection, discovers that the fence is not properly attached at the base and can form a gap big enough for a boy of Bruno's size to fit through. Using this information, his father eventually pieces together that they gassed Bruno to death. Several months later, the Red Army arrives to liberate the camp and orders Bruno's father to go with them. He goes without complaint, because "he didn't really mind what they did to him anymore".
Posted by monica93 at 4:57 PM No comments: